I am Gilberto Prujansky, a Vancouver based designer and UX specialist,
interested in edgy tech, VR/AR/XR, gaming, entrepreneurship,
and always seeking the best user experience in every interaction.

I am a designer with a unique background. I have extensive experience in several different industries, designing interactive products and services, throughout all kinds of media, from different perspectives, always learning, changing and adapting to reach the balance between business and user experience.

Let me take you through a quick summary of some of my past experiences: 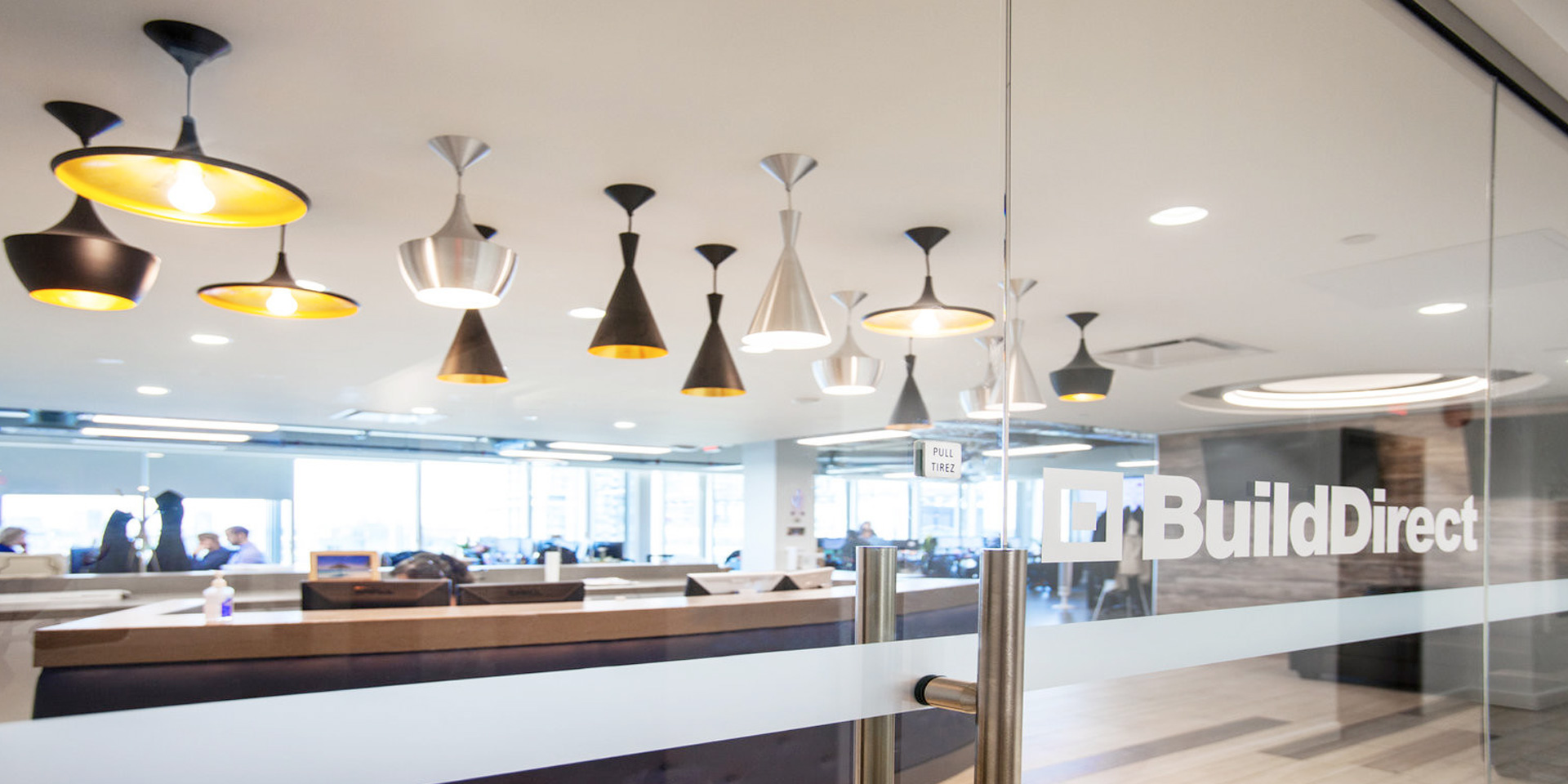 Brought in to lead UX. First, worked to improve back-office systems, such as Inventory (IMS), Tracking (TMS) and the Operations Management System (OMS). Then, together with a small UX team, we wrote and facilitated several design thinking sessions, each focusing on a specific part of the website, gathering stakeholders to come up with ideas and solutions, while raising the overall UX maturity of the company. I also worked on the web page, tweaking some features, working on a full site re-platforming, testing some new technologies, started a new design system and the re-design of a new webpage (TBA).

Since private mobility apps were introduced in the city in early 2013, the official city taxis have been losing market share day-by-day. The peculiar strong yellow with a blue stripe taxis can be seen all over the city, so they became part of the city environment. Therefore the new mayor declared them a city heritage and started a project to renew and modernize them. I was brought in to research, concept, and design a new mobility service, with an app as the heart of it, and with the purpose of, in a near future, when replacing the outdated taximeters, the taxi drivers could have a fair competition in this market.

Along with two more UX specialists, one visual designer, six developers, and all sort of stakeholders supporting this squad, we had a really short period to test, validate and prepare it for launch. After 2 months of street testing, with 150+ drivers and 300+ users, the MVP app was working fine and was approved. With around 60+ features already designed to be added in the launching version, lots of researches/studies released as subsidies for new features, and full-service touching points mapped, I left the building (to come to Canada) feeling my mission was accomplished and wishing the best luck for the squad and the project. Go Taxi.Rio! 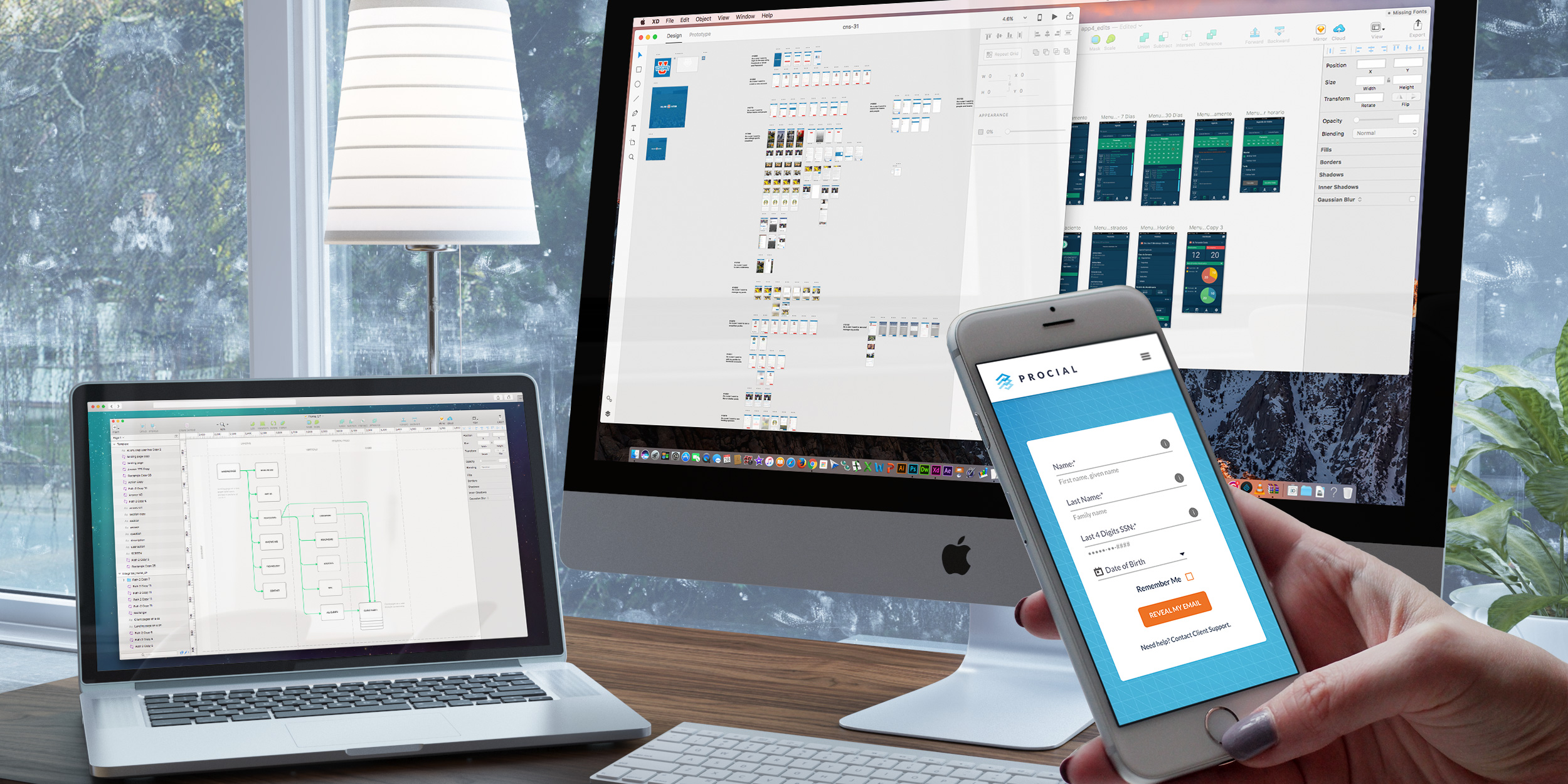 This Austin-TX based software company works remotely with designers and developers all over the world, especially from Brazil and Sri Lanka – respectively. I experienced one year working from home, in a very fast pace, on several web and mobile projects, communicating with all sort of stakeholders throughout these agile environment projects, always online, and using a plethora of different technologies as each product required. I could work hands-on just on a feature or on an entire new giant product/service, but always learning a lot from that multi-cultural environment and high-level colleagues.

Top-of-mind classifieds ads at Infoglobo – Holding of some of the biggest newspaper in Brazil. 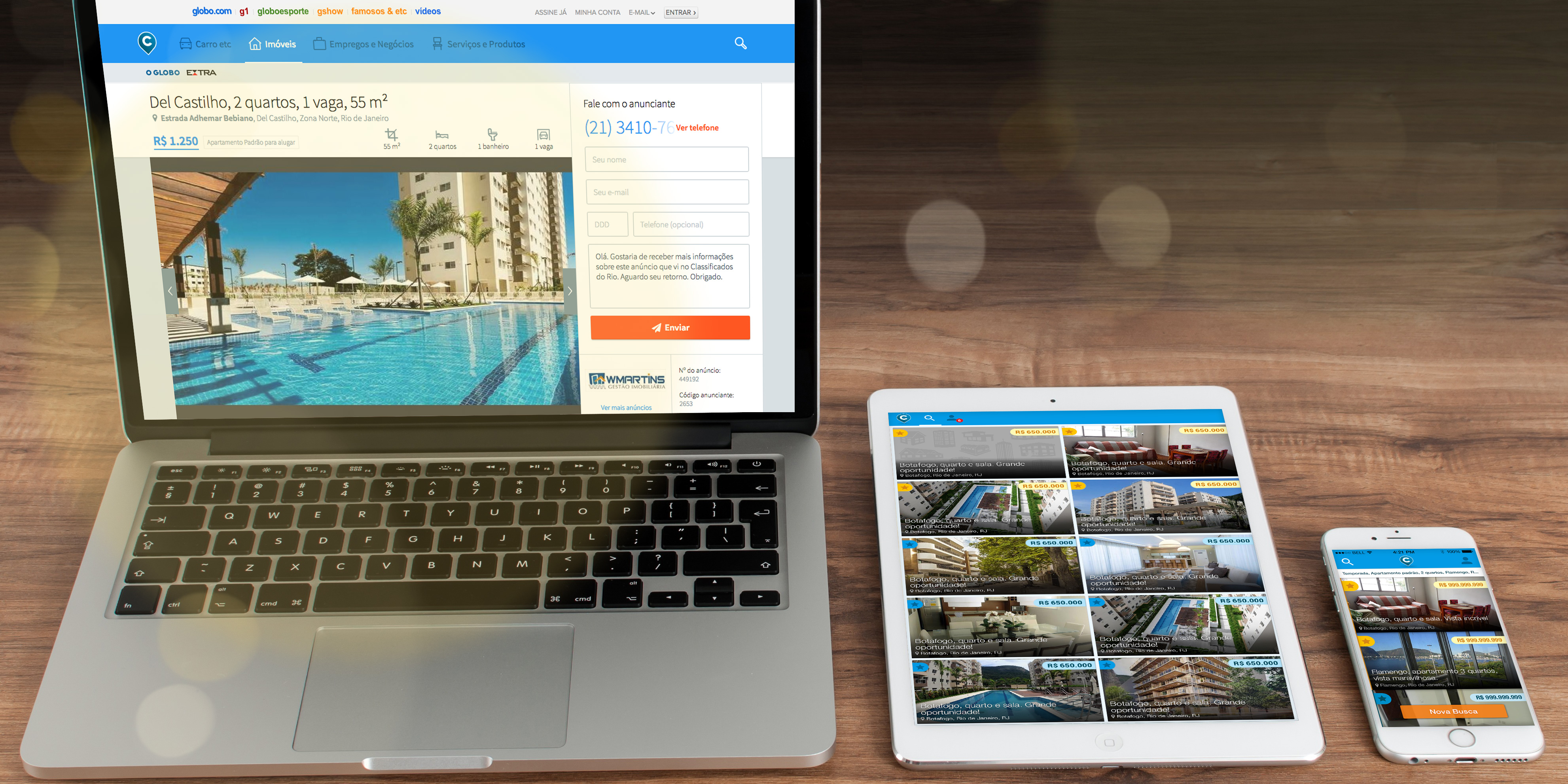 After some quick but important projects to Infoglobo, I was called in to create from scratch the online version of the biggest classified newspaper section of the country. It covers Real Estate, Cars, Business and Jobs, and Services and Products.
So, each section has its own particularities, which required a lot of different researches and studies. It was like six months just untangling all the information necessary to put on a team to work on it. It was a huge project, with more than 20 developers/testers, 4 UX designers, 3 front-end dev’s, 2 Project Managers, and some other stakeholders. The website took a year on developing, and after that, I took over other hats, like PO and UX lead for the mobile versions, while still supervising the iteractions of the main website, as it kept evolving.

This project was born when Senkan – my mobile games startup, started developing some educational and branded games. We were then invited by Conspiração Filmes – biggest audiovisual production house of Brazil, to create a series of 5 animated interactive books – loaded with casual games in it, for their award-winning TV series D.P.A. (Blue Building Agents, in Portuguese). We worked together with Copa – another highly awarded animation studio, and created all the user experience dynamics and also a new character, just for the books, to be the narrative voice. It was such a success that this character ended being incorporated into the TV series, and more recently in the featured D.P.A. movie. We are very proud of this cross-media project. It was available for iPad (iOS7-8) at the time, and for Android they still can be downloaded from Google’s Play store.

Brought in to develop a whole new brand for a complete line of nutrition supplement products and to take care of some other brands already in the market – under the umbrella of SDI Labs creative department. I was responsible for a small group of mixed skills talented creatives and 3rd party developers, overviewing online and printing processes, e-commerce website, and whole social media content strategy, thus guaranteeing the success of the cross-platform campaigns integration.
After 2 years the new brand ‘Muscle Warfare’ was a huge success, selling in all major distributors worldwide – like GNC and Vitamin Shoppe, and was consistently expanding by the time I left.

Web and motion direction at Globo — largest media conglomerate in South America and 4th in the world. 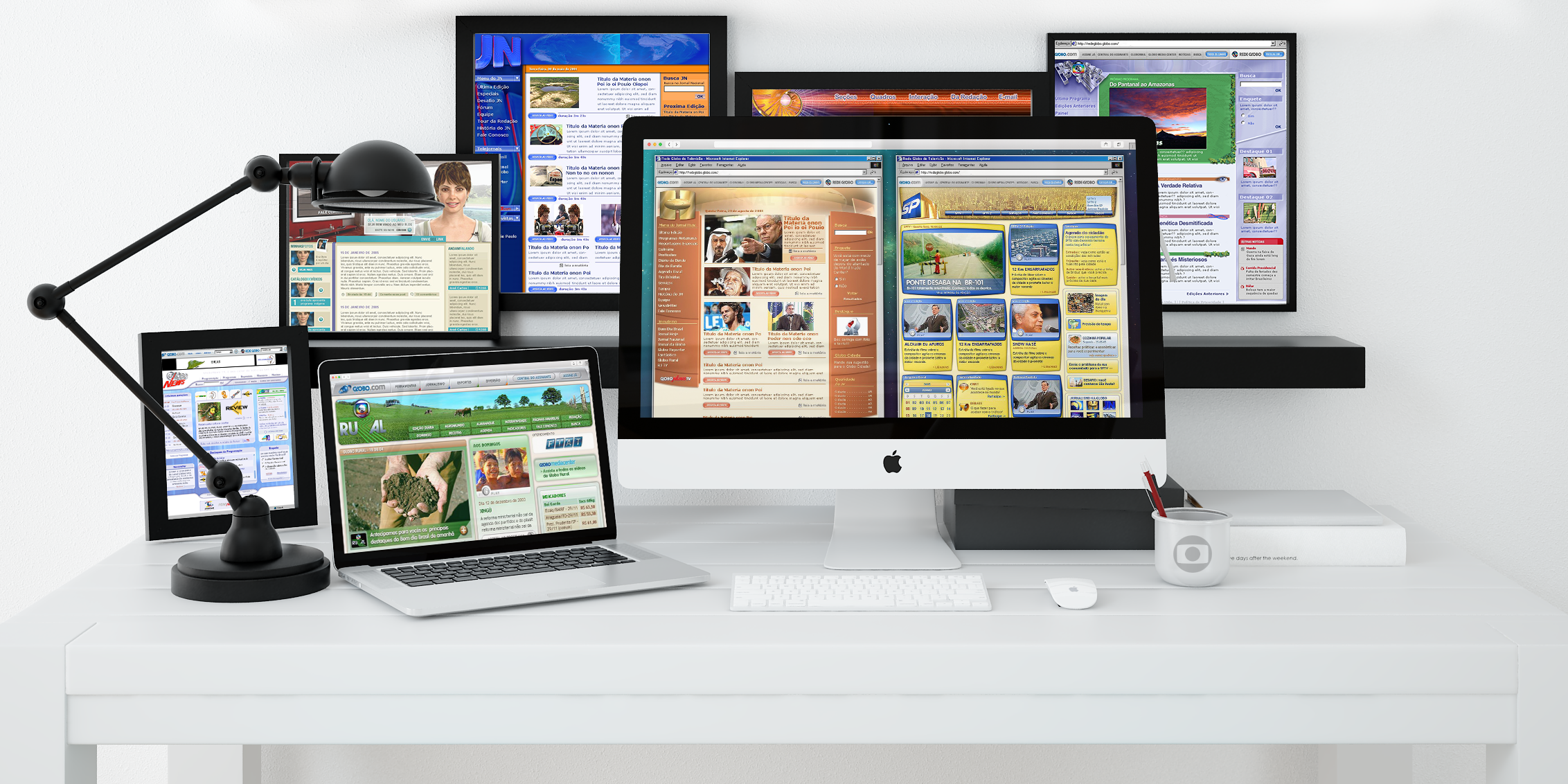 Many years leading an agile web team of developers, designers, and information architects, creating and evolving every single website of the journalism department – some of them had up to 3 whole different redesigned versions. We did some highly watched entertainment and reality shows websites as well. I also art directed special TV shows openings and motion videos, while helping to create the UX mindset and culture within the corporation.

This portfolio is still a work in progress. Please come back soon to check some more detailed case studies. If you get curious, you can take a look at my (very) old visual portfolio here or maybe an even older version here. Cheers!

Please refer to my Linkedin Profile to find more details of my work path, or you can have my resume by email, upon request, if you please. Check some other social links below. Get in touch. Thank You.